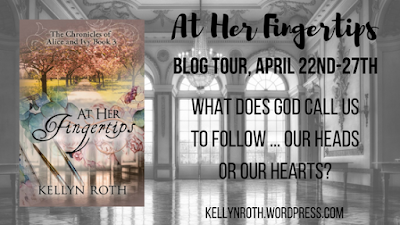 I'm excited to participate in Kellyn Roth's blog tour for her latest book, At Her Fingertips. Although I haven't read her books yet, I'm looking forward to doing so. They're set in one of my favorite places during one of my favorite time periods: England in the late nineteenth century. 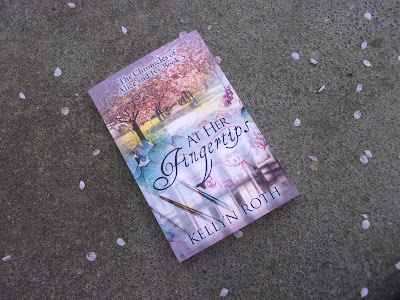 At Her Fingertips
(Book #3 in the Chronicles of Alice and Ivy)
Alice Knight is looking forward to her debut as it means she will be able to carry out her plan. She will have her first Season in London, she will meet her husband, and she will marry him. However, Alice struggles to make her feelings reconcile with her goals.
Alice is sure that, if she can only cling to her plans, she will manage without help from anyone — including God. A childhood friend returning unexpectedly, a charming gentleman who is not all he should be, and an American author with strange ideas about life all make her question the plan.
With the life she longs for at her fingertips, can Alice grasp it?
Find Out More!
Character Guest Post
I'm privileged to host on my blog Peter W. Strauss, an important character in At Her Fingertips.

My Trip to England
by Peter W. Strauss

My name is Peter Strauss. I’m not your regular writer, so I’ll briefly introduce myself. I’m a reporter for the Pennsylvania Herald and author of various poems and a few adventure novels.

You see, the editor of the Pennsylvania Herald—Thaddeus B. Goodington JR—got irritated with me. Why? Well, I may or may not have let slip in front of his mother that he’d been allowing anti-suffragette articles in the paper. If I had known he wanted to keep it a secret from her, I wouldn’t have said a word, but … it just slipped out!

Perhaps he deserves it a little, though. Honestly, I don’t know what Teeb has against women. I need to look into it. If he got his heart broken, perhaps I can help him through it. More likely he’s just ornery, though I hate to think that of any man.

At any rate, when Teeb—my nickname for him—learned that it was me who leaked his secret, he called me to his office and told me he was sending me to England to write a series of articles. Which is something of an old joke between us—he’s always threatening to send me somewhere. So I laughed. And he pulled out a boat ticket.

Teeb’s serious face is exactly the same as his joking face. Though if I had really taken a moment to look in his eyes, I think I might have guessed. But I didn’t think he could be serious. Who sends one of their reporters to England when they’re mad at them?

So here I am, on the ‘blessed plot’ of Shakespeare, writing a series of articles about the British upper class. Thank goodness I already had my foot in the door—I’d met an Englishman, Mr. Gibson Ashfield, when he was touring the American West a few years ago. He’s only a boy—a slightly older boy than he was when I met him last, yes, but still a boy—but he’s a rich boy. And he was glad to have me here.

Don’t get me wrong; England is glorious! I’ve seen the Tower of London and London Bridge and the Thames and all sorts of other things that I used to read about as a child. I plan on seeing any number of other landmarks before I leave. It’s quite exciting—the land of Shakespeare, Dickens, Scott … the list goes on! All my heroes.

So no, it’s not England. England is perfect. It’s just rather disagreeable to be sent away like this whenever your boss says so. First it was New York then Georgia then Oregon. I keep getting farther and farther away from home. Before I know it, I’ll be on the moon, and I don’t know if I can come back from there.

All joking aside, I suppose I am secretly thrilled to be here. High society is absolutely fascinating. All the social cues and rules are lost on me, I’ll freely admit, but I am slowly coming to understand them.

The Ashfields, who I’m staying with, are a confusing family—they present a unified front in public, but I sense all is not right at home. I’ve refrained from including any personal details in my articles, but they are an interesting case to study.

I’d say a great many people here are interesting cases, though. It seems as if everyone’s hiding something—or perhaps my imagination is misleading me there. But I do believe a great many people pretend their wealth and the gaiety of their lives is making them happy—when truly they are miserable.

I wish I could sit down with each and every one of them and talk about God, even for just a few minutes. But that is impossible; I can’t reach them all. But even just a few would be a blessing.

I don’t believe religion is a polite subject—at least not religion as I would like to present it. Society may be quite pious and moral on the outside, but I don’t believe it’s any more real a few levels down than it ever is in this world. I wish they could know how much joy there is to be had in God.

But I’m rambling. I was going to tell you about England some more.

London to me seems quite foggy. It takes on a greenish glow, especially by lantern light, that is ridiculously eery. I see where Dickens got his inspiration for spectres. I can almost imagine ghostly shapes in the shadows! But I know that’s all nonsense.

The city is big and loud. I’ve mostly stuck to the cleaner sections, except for a few brief forays, so I’ve seen more of the inner circle. I’ve been to Hyde Park, now—it’s winter but I can tell it will be lovely once it is all green and warm.

My favorite was a quick trip to Stratford-upon-Avon, Shakespeare’s birthplace. He’s always been my favorite—I adore his plays—so this was a special treat for me. I barely talked Gibson into it—anything that drags him away from society and/or Miss Knight for more than a few hours annoys him. But he finally gave in, and it was a wonderful day. Besides, Gibson can stand to get away from London every so often, truly.

Now, that’s about all I have to say—I’ve ran rather long as it is! I tend to write lengthy prose—my apologies.

I enjoyed writing this article and hope you enjoyed reading it,

As ever,
Peter W. Strauss 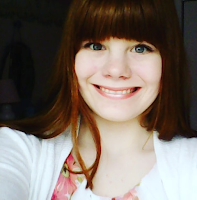 Kellyn Roth was born and lives on a cattle ranch in North-Eastern Oregon. Always fascinated with telling stories, she created crazy games to play with her little brothers as a child. Today, she writes Christian and Historical Fiction with a focus on truth and family. Find out more about her and her novels at kellynrothauthor.com.
Social Media
Facebook: @krauthor
Twitter: @ReveriesofRuby
Goodreads: krauthor
Google+: +KellynRothAuthor
Instagram: kellbellroth
Pinterest: krauthor
YouTube: Kellyn Roth
Amazon: author/kellynroth
Personal Blog: kellynroth.wordpress.com
Book Blog: reveriesreviews.wordpress.com

Reading the Bible with Rabbi Jesus 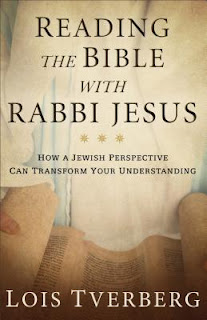 Note: I’m passionate about studying the Bible and learning to follow our Messiah, so I was thrilled to have the opportunity to read and review this book.

In today’s world, we recognize the need to understand and respect cultural differences. Besides being necessary, it’s hugely enriching! How much more, then, should Christians become more familiar with the culture and viewpoint of the people for whom the Bible was first written? It would help us better understand the Word of God that we live by. Lois Tverberg’s book is a compelling path into the Hebraic culture of Bible times, enjoyable and accessible for readers at all levels of biblical knowledge. It’s perfect for Bible study groups because each chapter has questions for further discussion at the end, as well as recommended reading for further study.

First and foremost, Tverberg’s book is significant because it puts Jesus back in His Jewish context while fully upholding the tenets of our faith. It explores Messianic prophecies, how they were viewed in His time, and how He fulfilled them. (I got chills reading about Isaiah 53.) This book explains how He claimed to be the Messiah in ways that non-Jews might miss.

The book also shows how understanding the cultural context and historicity of the Bible is faith-affirming. If there’s something that our Western minds can’t grasp, we’re apt to dismiss its veracity. But when we get a glimpse of the radically different mindset of non-Euro-American civilizations, we realize that what we questioned makes perfect sense to the other half of the world’s population. I enjoyed learning about the differences, especially the ones that explain some confusing parts of the Bible (such as why the “begat” sections are important).

I loved how Tverberg examined the full meaning of the Hebrew words behind terms that are pivotal to our faith, such as Christ, gospel, king, and fear/reverence. There’s an appendix called “Thirty Useful Hebrew Words for Bible Study,” a wonderful resource that curates the words she talked about in the book as well as words she didn’t cover.

The section on how Jews read the Bible was also very enlightening. As the book depicts, adopting some of their methods would be beneficial to Christians in our search to better know God’s Word and understand our Messiah. It’s amazing how they memorized it, how they connected it, how they quoted from it … and what a sophisticated scholar Yeshua was.

There’s so much more I could say in praise of this book, but probably the best thing I could do is encourage you to read it. It will deepen your appreciation for God’s message to humanity and for His chosen people, and it will remind you of His greatness!

(I was graciously provided a copy of this book for my honest review.)
Posted by Kelsey Bryant at 6:15 AM No comments: