Blog Tour: Preacher on the Run 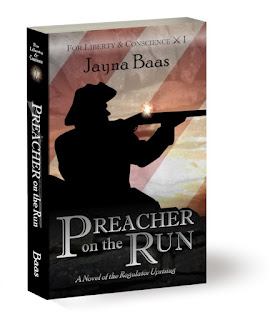 Robert Boothe has spent the last four years leading the tyrant-hating Regulators in standing against North Carolina’s corrupt British government. Just being an unlicensed dissenter preacher is enough to make Robert a target, but he refuses to back down from his conscience. Aside from a sympathetic court justice, the village of Ayen Ford has no other champion for its poor and defenseless. Then Charles Drake, emissary of His Excellency William Tryon, comes to town with one ambition: winning the governor’s favor, no matter what it takes. And Robert Boothe just might be his last chance.All Robert wants is a safe place for his little Baptist church to live and worship God. But the established church wants him to shut up. The governor’s men want him dead. And that safe place is farther and farther away. You can run, but you can't hide . . .

Preacher on the Run is the first book (hopefully!) of the For Liberty & Conscience trilogy, which combines North Carolina Revolution-era history with Christ-centered fiction: page-turning stories of Christian people living Christian lives in the daring era of America’s beginnings. 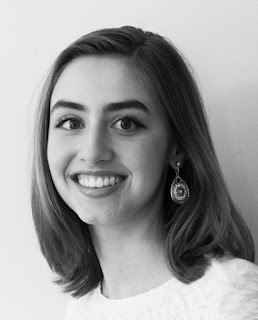 Jayna Baas (pronounced as in “baa, baa, black sheep”) lives in northern Michigan with a great family of real people and the family of pretend people who live in her head. (Yes, she does know her characters are not real. No, she does not want you to tell them she said so.) She is notorious for working on several projects at once and writing her series in the wrong order. She hones her craft amid loud southern gospel music and an embarrassing number of composition books, and is convinced God wired her to write—she can’t not write, even though she believes German writer Thomas Mann was correct in saying, “A writer is someone for whom writing is more difficult than for other people.” She enjoys writing and reading in a wide range of genres, but her favorite story is this: “For God so loved the world, that he gave his only begotten Son, that whosoever believeth in him should not perish, but have everlasting life.” (John 3:16) 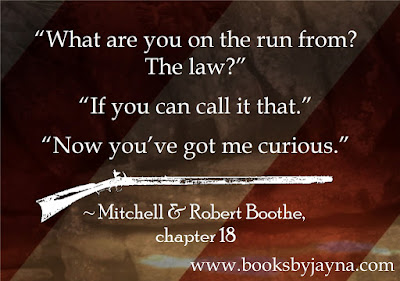 Guest Post: Behind the Scenes of Preacher on the Run

I do most of my writing late at night when the house is quiet, or at my desk when I have an uninterrupted block of time. I’ve tried in-depth outlining that goes on for pages and pages, but by the time it’s done, I feel like I’ve already written the story! So I use a very basic outline, which I rearrange as my story develops. Most of my drafting happens with a pencil and composition notebook—and a lot of  blood, sweat, and tears. I do my first round of editing as I type each drafted section. Occasionally I skip scenes and draft them later, especially if they require extra research, and I keep a file of “spare parts” in case I cut a scene I want to use later. Sometimes if I feel particularly stuck, I “procrastitask” by making character profiles, playing with cover art, or designing trailers so I can pretend I’m still working on the book. (It’s definitely procrastitasking if you’re working on the trailer before you even have a storyline to work with!) I rewrite a lot, edit meticulously, send the finished product to my beta readers, rewrite again based on their recommendations, and then close my eyes and tell myself it’s time to say “good enough.” Here’s a peek at what did and didn’t make the cut in Preacher on the Run:

- In various preliminary drafts, the opening scenes included material I later used in other places: the courtroom scene, a lengthy version of Justice Sheridan’s warning to Robert, and the idea of property being auctioned to pay unjust debts. In my earliest drafts, Charles Drake was the court clerk. He worked much better as the governor’s emissary, triggering trouble by his arrival in Ayen Ford.

- Hank Jonas was originally just a circuit-riding partner to Mitchell Boothe. When I needed a fuller storyline for Mitchell, Mom suggested I tell the story of how he and Hank met. That development added so much to Hank’s character that he’s one of my favorite supporting characters now.

- Caleb Thurmond began as Asa Hammond, suffering from an unnamed disease. “Asa” made me picture a much older man, so I eventually changed the name and gave him an actual injury that could become part of the story. “Hammond” seemed too close to the surname of co-villain Malcolm Harmon—who became Malcolm Harrod after I discovered a prominent Regulator, Herman Husband, was also known as “Harmon.” I didn’t want any confusion if readers did further research on the Regulator Uprising.

- Neither Alec Perry nor Jacob Chauncy were in my original outline. I added Alec when I needed a secondary Regulator leader, and Chauncy when I needed a representative of the Church of England.

- I planned a second book before this one, intending to write Preacher on the Run later as a prequel. When I got severely stuck in my initial project, Mom suggested I write the first book first. (Imagine that.) I’m so glad I did—a lot of things changed as I wrote Preacher on the Run, and I discovered characters and plotlines that have altered the course of the sequel. The biggest instance of that is Magdalen Boothe’s character. I originally imagined Robert Boothe as a widower, but once I got to know Magdalen’s character, I both liked and needed her too much to leave her out.

There are more “tweaks” I could mention, but some would be definite spoilers. I’m sure there are more tweaks I could have made, too, but I had stop somewhere or the book would never have gotten  published! (It was almost a relief to send it off to press so I had to stop editing.) I hope you enjoyed this little behind-the-scenes look at my writing, and if you think I should have left well enough alone on any one of these points, please don’t tell me! 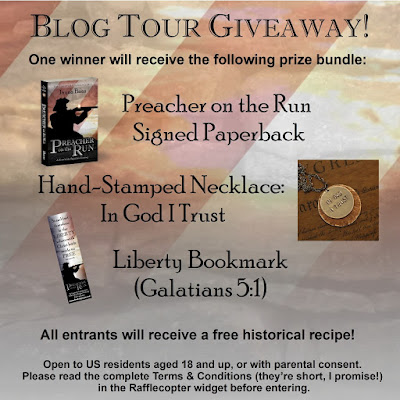 Prize: One signed copy of Preacher on the Run, one necklace hand-stamped with “In God I Trust,” and one bookmark with a Bible verse and book cover art. All entrants will receive free recipes from the colonial era.

Want to catch up with the blog tour and follow along? Here's the schedule!

Nov 21: Giveaway winners announced in Rafflecopter widget and on Books by Jayna (https://www.booksbyjayna.com)
Posted by Kelsey Bryant at 2:00 AM