The Origin of The Road to Bremen

Etzel the donkey just couldn’t face walking to the mill this morning. His knees and back ached as if the heavy sacks of grain or flour he often carried were already on his back. His master, Herr Hofmann, stood at the doorway to Etzel’s stall, clucking his tongue like an angry woodpecker.
“Ach! Are you coming or not, you insolent, lazy beast?”
Etzel gazed at him. He wouldn’t set foot from his stall, not for all the hay in the field. Well, maybe for that he would. But he certainly wouldn’t go out if Herr Hofmann expected him to make a trip to the mill.

~*~
These are the opening lines to my newest book, The Road to Bremen, which released this month. It’s quite different than anything else I’ve published before. It’s a fairy tale retelling, thus fitting under the label of fantasy. It’s 100,000 words shorter than my shortest novel, measuring in at just under 20,000. And it’s written with children in mind, though I attempted to write like my favorite children’s books authors, whose stories don’t talk down to their readers and are therefore appreciated by older audiences, too.

When I started writing The Road to Bremen, I wasn’t sure I would publish it. As my author bio relates, “Bogged down during the crafting of a much longer book, Kelsey started writing a retelling of one of her favorite fairy tales, ‘The Bremen Town Musicians,’ to resuscitate her creativity. She rather liked the result.” I wrote it for fun, and as I wrote, the idea that it would be a nice book to have illustrated began to take shape. I even knew who I’d ask. (Check back for her interview!) Well, that meant publishing, right?

The rest is history, and here we are at the present day. The Road to Bremen is available as a paperback and an e-book.

The Grimms’ fairy tale “The Bremen Town Musicians” is about four elderly animals who have outlived their usefulness, according to their owners. I set my retelling in mid-1600s Germany. Etzel the donkey can’t haul grain like he used to and just wants to rest. Jäger the dog is almost deaf and can no longer hunt or guard his master’s house. Katarina isn’t a good mouser anymore. Rüdiger, being replaced by younger cocks, is destined for dinner. But instead of accepting their fate and concluding that they are indeed useless, these old farm animals set off on a new adventure to pursue a dream: becoming musicians in the grand city of Bremen. But of course the journey is far from easy and far from what they expect. 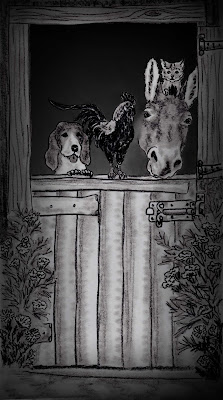 “We have been very honorable in pursuing this music-making and doing such a noble thing with our lives. It is only to be expected that our lives are in danger.”

My favorite aspect of writing the story was the characters. Etzel is a humble and visionary leader, yet proud of being a donkey. Jäger is a droopy, lovable hound dog who follows along and tries not to cause trouble. Katarina is a spunky spitfire of a cat who can’t help but be annoyed by Rüdiger the rooster. Rüdiger is an intelligent creature who values dignity and honor and quotes Aesop. Together, they make a band of musicians . . . and more important, a band of friends and heroes.

My illustrator, E. Kaiser Writes, did a phenomenal job of bringing the animals’ images to life on the page. I’m excited to be interviewing her in a couple of days! And I hope you’ll join these animals on their quest if you’re in the mood for a heart-warming read.

Posted by Kelsey Bryant at 1:58 PM

Email ThisBlogThis!Share to TwitterShare to FacebookShare to Pinterest
Labels: Road to Bremen